“Who can avoid the sins of the fathers? but you go ahead kid, it’s your turn to walk on water” Daniel Amos

I think if I were to ever get a tattoo, it would be this image (drawn by Robin Clarijs): 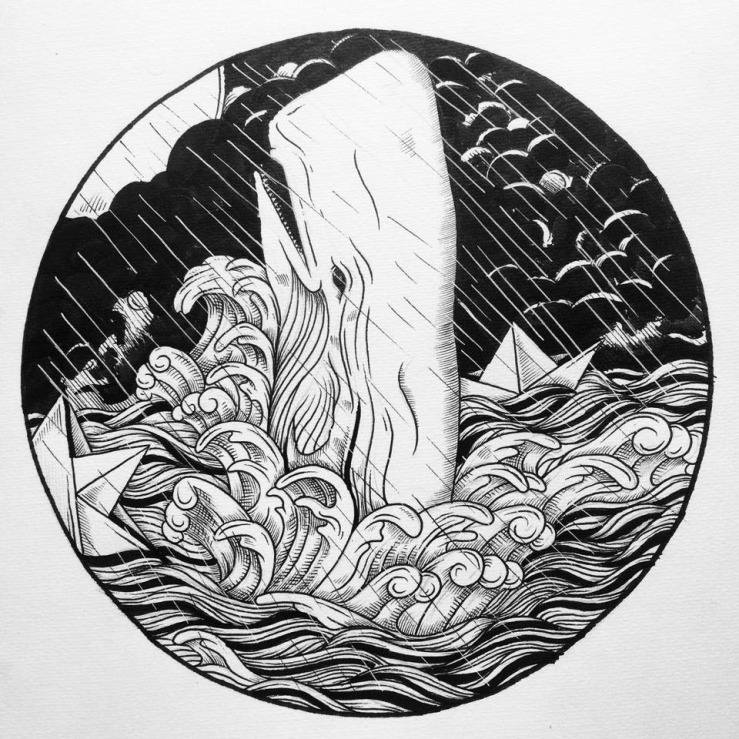 I recently read Moby Dick for the second time.  It is such a profound work, with some of the best lines I have ever read.  The most memorable passage is in Chapter 60, which talks about the way the whaling line is wrapped around the rowers in the small boats that chase the whales during a hunt; in time people get used to being surrounded by the life-threatening danger these ropes can pose.  You can read the entire chapter here.

There are some understandable beefs you can have with Moby Dick.   The lengthy section proposing a new way of organizing all the whale species is admittedly pretty boring.  More significant would be the horrific racism, which would appear to be a valid tattoo veto.

If you’ve read the book, your know what I’m talking about.  If not, here’s a 12th grade book report that will give you an idea.  Basically any racial stereotype you can imagine is presented at some point in the book.  I mean, in chapter 34 he uses the phrase “noble savage” verbatim.  Prior to my beloved passage in chapter 60, there is an appalling line about how the golden-colored rope is better than the dark colored line…you know…just like people…

Stamped From The Beginning by Ibram X Kendi (which I am currently reading) describes the insidious way racism has shaped crept into every aspect of American culture, and Moby Dick certainly was a influenced by its time.

If you are feeling charitable towards Melville though (admittedly easier for a white dude to do), you can find some extenuating circumstances too.  All of the characters are heightened, and he seems to describe all cultures in broad strokes, such as the mention of “the all-grasping western world” in chapter 87.  When these caricatures of cultures collide, Melville often sides with the non-western one, such as in the end of chapter 65 and the early chapters where Queequeg is introduced.  Of course, these same chapters also include plenty of cringe-worthy stereotypes.  My goal here is not to absolve Melville, but to add a little nuance.  Also, there is some reason to believe that Ishmael is an unreliable narrator.  For example the supposed statement of the Spanish Don Pedro from chapter 54, “‘Nay, Senor; hereabouts in this dull, warm, mostly lazy, and hereditary land, we know but little of your vigorous North.'” As a reader far removed from the 1851 writing of the novel it’s hard to say for certain, but to me it seems too over-the-top to be read as serious dialogue.

For all of its profundity (and the explanations/excuses one can make), it is just plain disturbing to read lines such as, “the white man[‘s] ideal mastership over every dusky tribe” in chapter 42.  The vast majority of this 800+ page book is beautifully written, but the ugliness is there, and it matters.  I frankly don’t know what to do with this.

Perhaps that’s why the illustration above appeals to me.  It shows a scene from Moby Dick, but with paper boats instead of actual ones.  It seems to be saying that you can take what is valuable from the story but are free to cast off the rest.  I guess that is a decision for each reader to make for themselves.