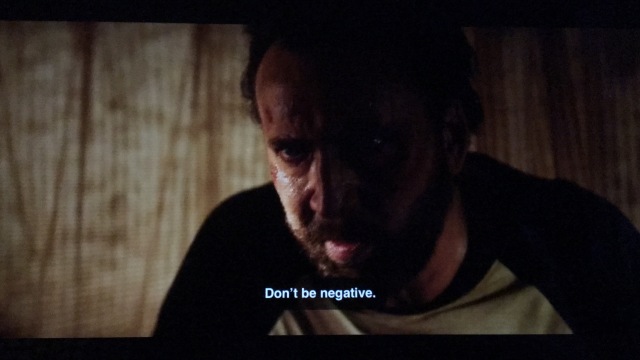 “You have got to see this,” my wife said, handing me her phone with the trailer to Mandy cued up. So I did…and here we go. Fair warning: spoilers ahead.

First I love the concept behind Legion M, and thought Colossal was pretty cool.

Also, the visuals in this movie were incredible. That alone made it worth watching for me. Whole scenes were illuminated in pulsing reds and blues which really worked well. After reaching the climax under blinking red radio tower it makes you reconsider the earlier scenes in red. Is it foreshadowing? Is the director saying it was fate for the story to unfold as it did? Is it a statement about the nature of time itself? I dunno, but it’s cool. Given the themes of high emotion, dreams, imagination and various hallucinogens, the trippy visuals work- like the alien sky, and the slowing of time when the cult leader sees Mandy for first time.

I also really enjoyed the nods to classic 80’s moviemaking. This extended from little touches like the shot of the psycho biker clearly “riding” stationary in front of a green screen, apparently down to the camera and shooting format itself. It’s a great idea for a movie set in the 80’s and works well. Even the style of gore feels imported out of the 80’s- think melting heads from Raiders of the Lost Ark and voluminous movie blood. Compared to the forced nostalgia of Summer of ‘84 this really nailed the feel of the decade.

There’s this great part in Big Trouble in Little China where the bad guys (with a damsel in distress in the trunk) attempt to run over Kurt Russell and his sidekick. They dive out of the way just in time. Russell rises and with an icy stare says, “Son of a b*tch must pay.” It’s simultaneously hilarious and and exciting at the same time. It works because it is true to the character in the story: a macho dude who is a little ridiculous. 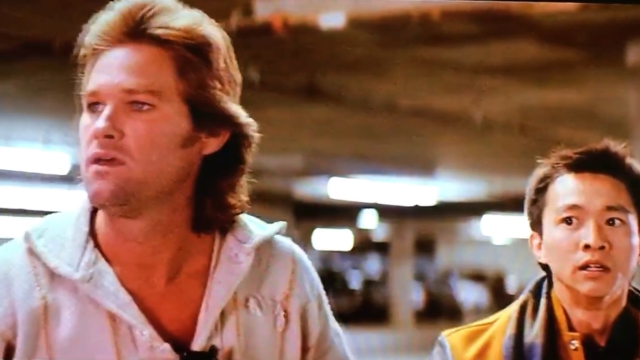 In Mandy there are some lines like this that feel natural and earned, like, when Cage is warned that he is almost certainly going to die taking on the bikers and replies, “Don’t be negative.” Others feel so forced and out of place because they just don’t fit the character. When Rad (a.k.a. Nicolas Cage) calls one of the demon bikers a snowflake before tripping him into an abyss it just comes off weird (wait, did they have Twitter in the 80’s?). It feels too self aware, bordering on Sharknado territory. Believe me, I hate it when people nitpick movies, especially when it’s assumed that there will be major suspension of disbelief in a movie this nuts. Still, it might be a quotable line, but when Nicolas Cage gets slashed across the chest and he shouts that they just ruined his favorite shirt, it undermines the stakes that they set up. Wasn’t that the point of the extended scene of him crying when Mandy was burned?

Consider the backstory of the crazy bikers, which works great. They’re killer psychos because of bad batch of LSD. For the rest of the movie they are comprehensible by this logic. If one gets shot by a crossbow, he may just stand there like he doesn’t care. On the other hand, early on Red is presented as a pretty unremarkable guy. He just lays there when the bikers break into the cabin and gets knocked out. He has no super strength to get him out of his barbed wire when he sees Mandy killed. Then a few scenes later he’s forging a weapon, a crossbow sniper and skilled at chainsaw fencing. Buy the time he catches up with the cult there is ZERO tension because apparently he’s got no human limitations.

I’ll leave aside a discussion of “fridging” of Mandy. I’m not sure if this is an intentional nod to another 80’s trope or lazy writing. The movie was certainly more tasteful when it came to leering at the female victims. I’m including the non-complicit cult member along with Mandy here. Considering how every other aspect is so over-the-top, this feels intentional, and contrasts with entire scene with Jeremiah’s junk in full view.

Overall the movie is packed with fascinating visuals, and overflowing with ideas. It is certainly flawed, but worth checking out if you have a strong stomach.